Don Estes currently serves a CEO and Director of InnerSense Inc., and Psiometric Science, Inc. He is a certified medical technologist, laboratory director and neuroscientist. He has lectured worldwide on sensory science and vibrational medicine, appearing on CNN, NBC, ABC, Entertainment Tonight, Science Frontiers, the Discovery Channel and Next Step, which won an Emmy award in 1994.

His work has been featured in Wired, Computer Design, Los Angeles Magazine and in national and international media. Estes’ book Harmonic Law: The Science of Vibration, illustrated by a large wall chart entitled the Absolute Scale of Relative Cosmic Reality, is one of the most complete compendiums of scientific and philosophical knowledge assembled.

Estes is the inventor of VibraSound® Sensory Resonance™ technologies, used by both professionals and nonprofessionals for music, sound therapy, relaxation, entertainment and expanded states of mind. His theories include proprietary knowledge and patents in the fields of light, color, sound, music and algorithmic automata.

Since 2001 his company, InnerSense, has partnered with Psiometrics in Glastonbury, England. Together they have pioneered a new science of universal automata, which defines the physical and mental mechanisms behind the manifestation of intention. They have also designed and constructed a world-class supercomputer that can render a model of any reality in a formal mathematical language. Their work is patent pending. 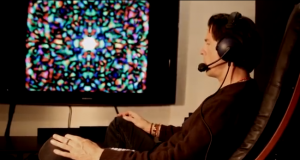 Just out! Download Apprentice versions of The Portacle (free)

(Right-click or control-click the link below.)

The Portacle was created for the purpose of demonstrating and teaching an individual or group to become more aware of their thoughts and feelings through their own breath.  A culmination of thirty years of research and experiential data has brought to light a cutting edge biometric feedback system that is now accessible to the public. This exciting and exclusive downloadable computer program provides people from all walks of life a powerful tool for self-awareness and transformation at the deepest level.

The goal of The Portacle is to empower and create true and lasting change individually and collectively.

By combining technology and consciousness, keeping the integration of body, mind and spirit at the pinnacle of their interest, the mission of the team at the Portacle is to support whole brain and whole body synchrony. It is their grand vision to give the end-users the ultimate tool for personal transformation and growth, thus assisting in the conscious evolution of humanity.

Any cookies that may not be particularly necessary for the website to function and is used specifically to collect user personal data via analytics, ads, other embedded contents are termed as non-necessary cookies. It is mandatory to procure user consent prior to running these cookies on your website.