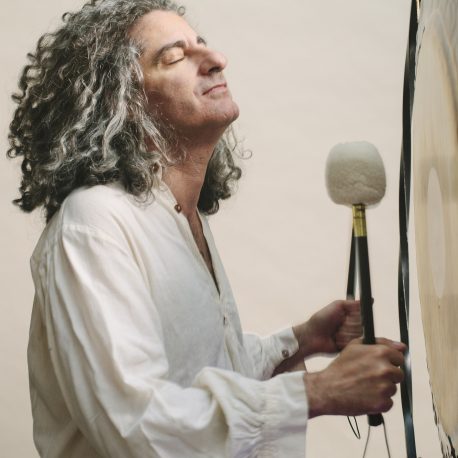 Alexandre Tannous is a musician, educator, composer, and ethnomusicologist. He holds four degrees in music theory, composition, music education and ethnomusicology. He has taught at Columbia University and is a frequent guest-lecturer at universities, institutions, and museums. As an ethnomusicologist, he has conducted fieldwork for 17 years in over 40 countries around the world.

For the past twelve years he has been researching the therapeutic and esoteric properties of sound from three different perspectives – Western scientific, Eastern philosophical, and shamanic societal beliefs – to gain a deeper understanding of how, and to what extent, sound has been used to affect human consciousness. This search has led him to the intersection where art, science and spirituality meet: the wonders of sound! His ethnomusicological approach entails a social scientific study of sound use in several traditional contexts—religious, spiritual, holistic, and cultural—for various purposes and occasions in entertainment, worship, meditation, and rituals of healing and trance. Consequently, his approach in researching, understanding, experiencing, transmitting, and working with sound has always been based on multidisciplinarity.

Lay down, get comfy, and settle in for a 51-minute-long magically transporting Sound Meditation, led by ethnomusicologist Alexandre Tannous – a sound expert who weaves art, science, and spirituality through sound to affect human consciousness. It encourages the participant to follow hands-on instructions on breathwork and auditorial humming before falling into a deep blissful state of hypnotic weightless existence surrounded by ancient overtones. Enjoy the mystic journey for the mind, body, and soul.

A Vertical Space Production for WelcomeEarthTV, recorded at a private residence in New York City.

And a sample of Alexandre’s sound meditations on Soundcloud:

The material Alexandre transmits about sound is based on thorough research over many years: observations he made during his fieldwork, scientific studies, and data collected from thousands of people he has worked with doing sound therapy. This has led him to a deeper understanding of how sound reveals and unlocks hidden powers we have within us to promote profound inner changes and healing.

Inspired by his findings, he designed a protocol of an integrated experience he calls “Sound Meditation” in which he shares the findings from his research, raising an awareness to how a specifically designed sound can have the ability to help us to disconnect from habitual patterns while judiciously listening to the specific traditional instruments he plays. He employs a phenomenological approach to study the effects of sound, using a method that empowers the participants to engage actively with tools that enhance their experience, using the consciousness-altering properties of sound to heighten self-awareness, to connect to the higher self, to fine-tune self-observation, and to attain self-realization.

He currently works as a sound therapist, teaches this practice, and lectures about sound.
soundmeditation.com